YOU LIVE IN US 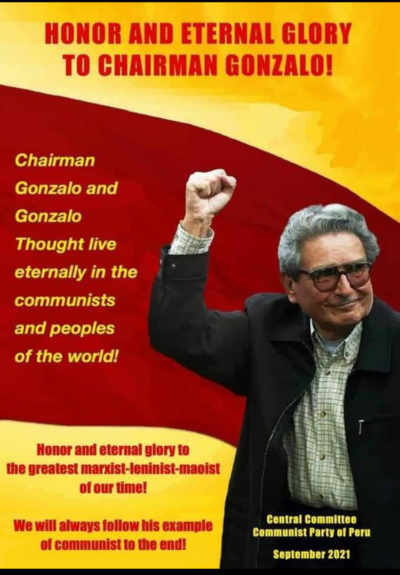 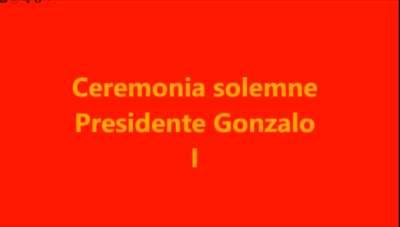 The counterrevolution boasts of having legally incinerated the remains of Dr. Guzmán to avoid "paying homage to him," as the Minister of Justice said, moving to the sound of the Navy. In turn, the bourgeois left, for the most part, backed the measure. Neither the opposition of the Free Peru bench and others to the monstrous law of kidnapping and disappearance of corpses prevented Boluarte and Castillo, like acolytes of Mrs. K, from supporting the position of the ultra-right. In this way the parliament, incapable of legislating favorably for the living, dedicated itself to outraging the dead. 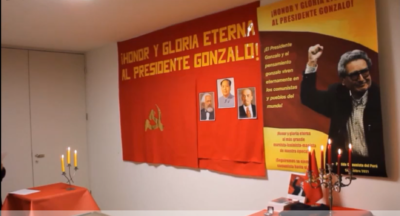 The remains of Spartacus, the great leader of the slave rebels, disappeared without a trace; that did not prevent him from being the greatest hero of antiquity. Joan of Arc, great French patriot against English rule in the Middle Ages, was burned alive at the stake by the Inquisition and her charred remains were thrown into the Seine River; That did not prevent her from being a great heroine of the French people and even a saint of the Catholic Church. In our emancipation, Túpac Amaru was torn to pieces, incinerated and his ashes thrown to the wind by the Spanish colonialists; nothing prevented him from being the greatest popular hero of our independence. 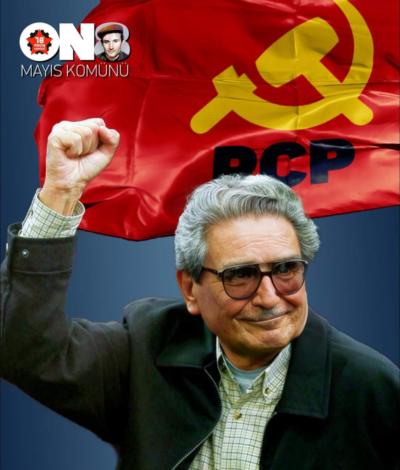 29 years of absolute isolation were a permanent torture that Chairman Gonzalo faced with total integrity and communist morality defending the revolution. When he became seriously ill, he was hospitalized on July 20 and managed to recover at the end of the same month. On August 5, Dr. Guzmán and his wife Elena signed a new request to INPE for the inter-prison visits that corresponded to them. However, in a macabre campaign, Expreso and others falsely reported on August 21 that Dr. Guzmán was still hospitalized and that his death "could occur at any time." His lawyer was able to talk at the end of August and a day before his death, having verified that he was stable. All this led his wife, in a recording that was made public, denouncing that they want to disappear the remains "and that is called homicide, murder and genocide" and that the impediment to seeing him for two years makes her think "that they have planned his murder ”. Clear and fair words that we have made totally our own and for which reason she was arbitrarily and abusively sanctioned and isolated to silence her protest and just demand for rights as a direct family member. 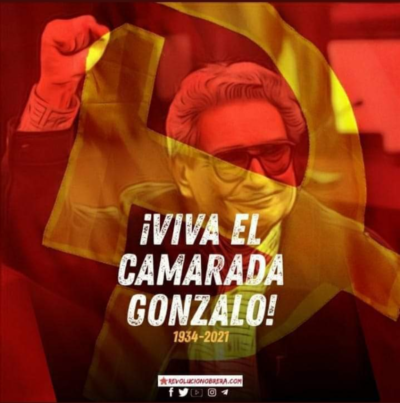 The so-called investigative journalist Ángel Páez, who boasts of having been in the autopsy room before the incineration, affirms without the slightest proof that “Guzmán dreamed of a glorious and indelible funeral”, that “he called himself the 'fourth sword 'of communism ”, that“ no one lit a candle ”,“ never faced danger ”,“ never risked his skin ”,“ ended up like many of his victims: devoured by fire ”, and in a cowardly and cruel way he mocks the appearance of the corpse. Beside him, the minstrel stammered: “I feel a sense of relief. It will never be a problem again ”. But even the forensic doctor expressed her claim when she said: "There was no reason to change the established protocols." 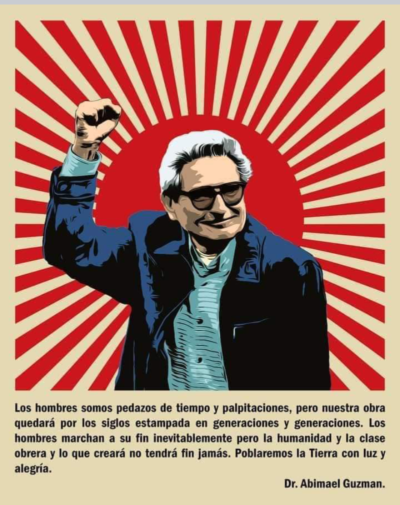 Chairman Gonzalo, since his arrest, affirmed that he would die in prison, he always fought the theory of the 'fourth sword' and defended Maoism as the third, new and superior stage of the ideology of the proletariat, with unparalleled courage he faced and defeated torture and violence. absolute isolation, they will never be able to prove that the guerrillas incinerated one person as the armed forces did hundreds in their crematorium ovens. And if they wanted “no tribute”, they already had and will continue to have the answer: the International Solemn Ceremony on September 25 with the raising of red balloons and the thousands of tributes in the five continents where millions of people continue to express through mobilizations, meetings, writings, denunciations, graffiti, posters their respect and admiration for Dr. Guzmán and, most importantly, their commitment to keep him alive in their struggles for a new world. What did they want? That the family and friends go to protest so that they get imprisoned as they did with the masses in Plaza San Martín for asking for a mausoleum for Abimael? 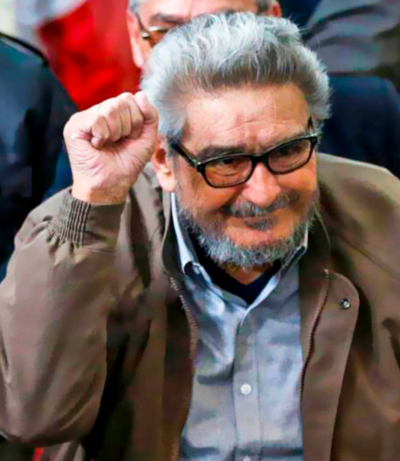 Thus, this poor hired down jacket only proves to be a poor devil of the worst moral character, capable of any baseness to serve those who pay him. And as for the so-called "cannibal" minister, in reality he will not feel any "sense of relief" because Dr. Guzmán and his thinking will always be "a problem" for the exploiting classes and their lackeys. 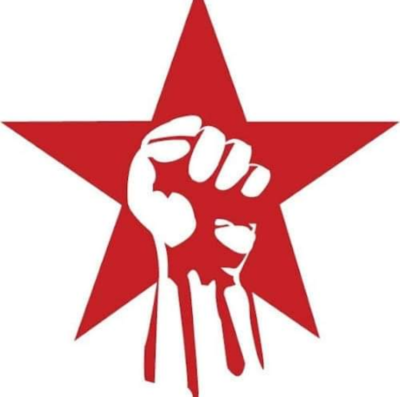 While the renowned BBC calls him "leader of the Maoist guerilla Sendero Luminoso", Euronews calls him "founder of the rebel group Sendero Luminoso", Associated Press recognizes him as "historical leader of Sendero Luminoso", DW speaks of the "historical leader of the guerrilla Maoist Shining Path ”; The reaction and its henchmen, repeating falsehoods and slander, call it "the greatest genocide in history", an invented and crushed typification without any foundation and even ignorant of what genocide means. Genocide was what the pizarros and other Spanish colonialists did, who annihilated millions with the cross, the sword and the smallpox; It was what the royalists did, assassinating more than 100,000 peasants for supporting and participating in the Túpac Amaru rebellion; and genocide was what the armed forces did, killing and disappearing more than 40 thousand masses, mainly poor peasants, for supporting and participating in the guerrillas that began in 1980. The deaths caused by the guerrillas in Peru cannot in any way be classified as genocide and no judicial sentence has approved it. But it is what the reaction and its prostituted press hammer day and night.

The figure of Dr. Abimael Guzmán is already immortal and will grow larger over time. His proletarian steadfastness, his people's simplicity, his almost organic optimism, his revolutionary courage and integrity cannot be dented. Let us remember his words: “As a materialist I believe that life will end one day, what prevails in me is to be optimistic, with the conviction that the work to which I serve others must continue, they will carry it until the fulfillment of our definitive tasks. , communism. Because the fear you could have would be that it is not continued, but that fear dissolves when you trust the masses ”. 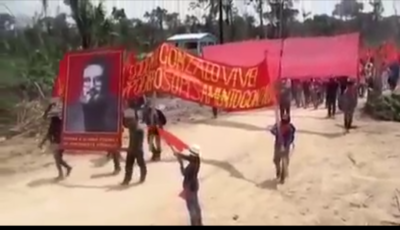 To the political prisoners of yesterday and today it strengthens us to see and feel the support of our people and the peoples of the world despite the sinister anti-communist campaign. And this is so because persecution does not stop the revolution but rather drives it, the prison is a popular school and tempts the revolutionaries, the killing of the people's children generates more popular rebellion, the burning of the corpse of Dr. Guzmán, an uncompromising communist, exalts its figure more. The reactionaries lift stones that will then fall on their own feet. 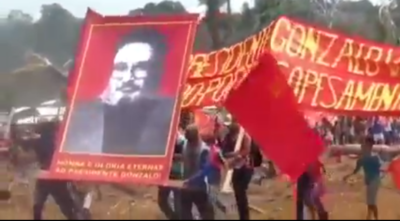 In 1993 we met the song I Live in You with the lyrics composed by Dr. Guzmán dedicated to his partner. There it said:

The day that I leave and I am gone

The struggle and the Party that united us

they keep burning gracefully towards the end

with them and our people in their battles

we have to live.

Following his path is the best tribute we can pay him. And in that tenacious struggle today, your imprisoned children tell you: YOU LIVE IN US.

National Committee of Political and War Prisoners of Peru 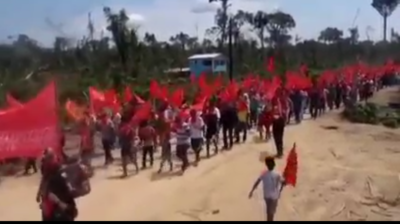 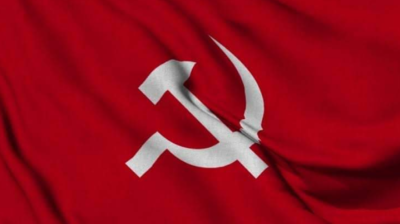